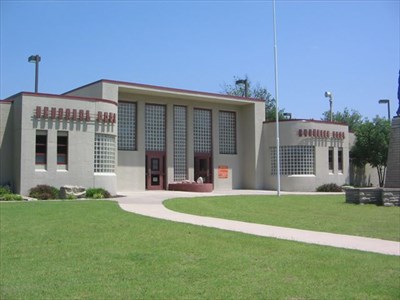 According to Boy Scouts of America, Troop 101, Cheyenne, Wyoming:

There are over 200 of these replicas in 39 states in the U.S. and several of its possessions and territories. The project was the brainchild of Kansas City businessman, J.P. Whitaker, who was then Scout Commissioner of the Kansas City Area Council.

The copper statues were manufactured by Friedley-Voshardt Co. (Chicago, IL) and purchased through the Kansas City Boy Scout office by those wanting one. All were erected in the early 1950’s by Boy Scout troops and others to celebrate Scouting’s 40th anniversary theme, “Strengthen the Arm of Liberty.”

The statues are approximately 8 1/2 feet tall without the base, constructed of sheet copper, weigh 290 pounds, and originally cost $350 plus freight.